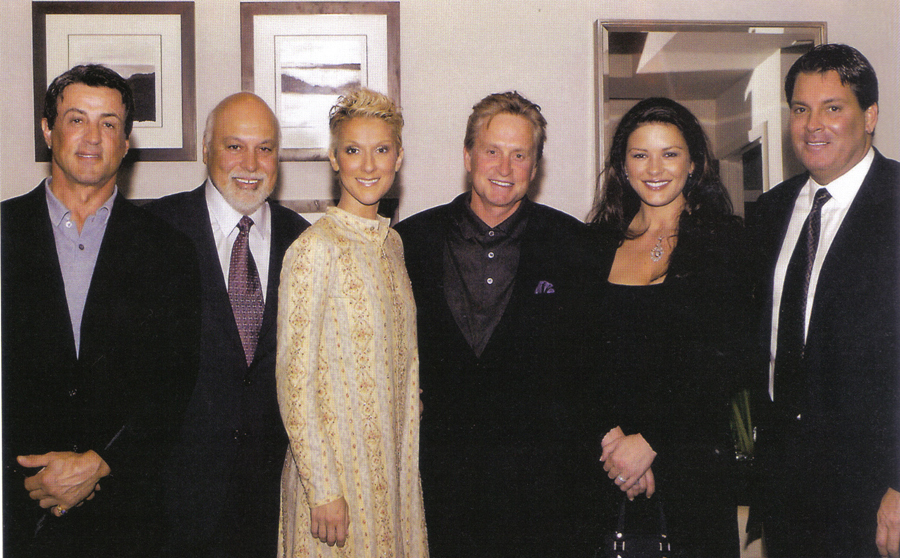 On May 17, 2003 Celine Dion met with Michael Douglas and his wife Catherine Zeta-Jones backstage, Sylvester Stallone, and the famous Spanish tenor Placido Domingo, before her perfomance of the show A New Day... at the Caesars Palace in Las Vegas, USA.

The same day, the news talkshow 'The Early Show' recorded a meeting between Celine Dion and one of her fans. The segment was broadcasted on May 30, 2003 on CBS channel.

"The wish I have for my mother is to go to Las Vegas to see Celine Dion."

It was time for mother and daughter to take their first big vacation together. Destination: Las Vegas, at the luxurious Caesar's Palace hotel. But what Lisa didn't know was Celine herself had other surprises planned for her. Jennifer Dunne, Celine's marketing director was in charge of making the magic.

The first stop was the special Celine boutique at Caesar's. Once the shopping was over, Lisa could only cry.

Jennifer tells Lisa, “It's only begun. You can't start crying yet.” And she wasn't kidding. The night was young and Lisa was completely startled by what happened next.

In just a few minutes, Lisa was fit for the stage, which is exactly where she was heading. Enter Brian Burke, Celine's artistic coordinator and dance supervisor.

He tells Lisa, "I'm going to do for you what I did for Celine when we put Celine into the show.”

After a quick run through of the routine, it was time to practice on stage while Natasha watched from the audience.

Brian added a few of the show's dancer's, lights and music. It was show time!

There was only time for a fast group photo and it was off to one final stop, dinner at the famous Bradley Ogden restaurant. Yes, compliments of Celine. Owner Chef Ogden made a special appearance.

Lisa took a rest, to reflect on the wonderful time she was having with her daughter. “This has been just unreal, just sharing this with her,” she says, ”It's been amazing.”

And just when they thought their day was over, Jennifer, who had been the ultimate hostess, pulled out the biggest surprise of them all: Celine Dion.

Lisa and Natasha say that the show was absolutely incredible and they plan on seeing it again soon. As for the future, Lisa says she is thinking seriously about going back-to-school, this time to get her doctorate degree.