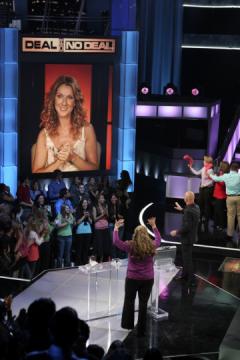 Celine Dion gave Deal or No Deal contestant and Dion devotee Casey Bell the surprise of her life when the songstress appeared via satellite to cheer her on during the show airing Monday, June 5, 2006. Besides, Casey won a trip to see Celine in concert in Las Vegas, awarded by Celine herself. The show was taped in May.

It turns out that Dion and her familiy tune in to the NBC game show every night despite the demands of her Las Vegas show's schedule.

Is it true you are a big fan of Deal or No Deal? I don't watch TV that much, but I watch Deal or No Deal. My whole family is hooked. My son [5-year-old René-Charles"] cannot even stand or sit still when the show is on. He is touching the TV screen, screaming "Deal!" or "No deal!"

How do you find time to watch? Mondays I'm off, so we watch it live. But my son watches it live on Wednesday and Friday, and watches the tapes with me again.

How did the producers get you on the show? I did it for my son; he's going to be surprised to see mommy on screen.

Do you guys play Deal at home? Yes! [Husband"] René [Angélil"] bought 26 cases and we play it at home. René-Charles is Howie [the host"], and René is the banker. We took a boat trip for my mother's birthday and played there, too. We don't give, like, $5 million but we challenge ourselves.

What do you think of [host"] Howie Mandel? He is gorgeous, beautiful, with great timing. He is fellow Canadian. I hope the show goes on.