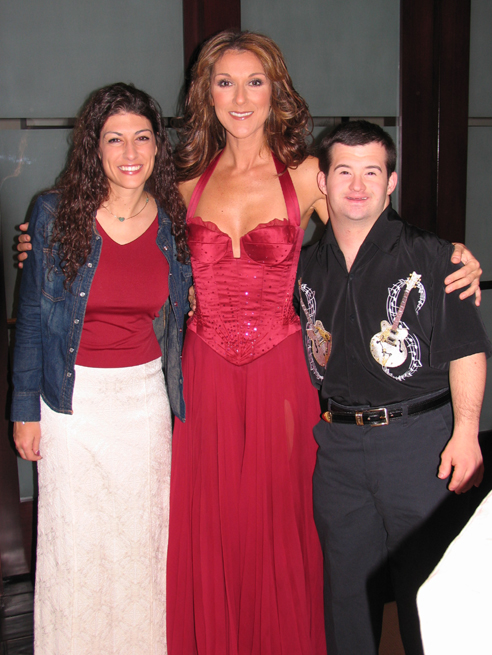 On November 10, 2004, Jenna Glatzer, who was writing a biography, met with Celine Dion, at the Colosseum at Caesars Palace, in Las Vegas, Nevada.

"I just returned from my first trip to meet Celine in Vegas. Ahh, Vegas. Thank God I don't live there or I'd have gambled away all my food money. I loved it there!

My first interview was with Rene. Because of his throat cancer battle, his voice is almost a stage whisper, sort of like The Godfather. He was warm and open and nothing like the power-hungry businessman I imagined he might be. We spoke for more than an hour, and he was a great interviewee who kept me laughing with stories about Celine and their son, Rene-Charles.Then we (my mom, dad, brother, and I) met Celine for a few photos before the show. Wow! She ran into the room apologizing for being late. “I want to blame it on my hair,” she said, “But the truth is I'm always running late!” I was just amazed that she was doing it at all... she had literally five minutes before the show would start, and here she was chatting with my parents and telling her assistant to take photos so we could all be in them. She was beautiful. Truly beautiful.

Next, we went to the show, where we sat two seats away from Tyra Banks. Tyra kept staring at us, wondering why we were getting VIP treatment. That was fun. The show itself was splendid, and I got a kick out of my family's reaction. My brother kept calling out, “I love you, Celine!” and my parents were wide-eyed and full of excited gasps of, “Have you ever seen anything like this?” None of us had. There are 65 dancers and the world's largest LED screen adding to the effect of Celine's magnificent voice, and she never lets up: She's right in there dancing with them, getting a crazy workout and never missing a note. Immediately my parents began calling all their friends to insist that they had to come see the show.

I interviewed her afterwards and was advised that I'd probably have to cut her off because she could just keep talking. They wanted me to make sure I was respectful of her time limitations and would not let her chat until dawn when she had another show to do the next day. “Yeah, right,” I thought, “Like I'm going to cut off Celine!” But I started to understand when I realized that 25 minutes had gone by and she was still answering my first question. That woman can talk!

Actually, it wasn't even my full first question. I began with a quotation of hers from years ago and was planning to ask, “Do you still feel that way today?” Instead, before I could, she was already off and running about why she had said it, how she feels about show business, and how she likes picnics. Okay, I'm oversimplifying, but she covered a lot of ground! They didn't feel like soundbite answers, the canned answers publicists have trained stars to say. It just felt like an engaging and free-flowing conversation. I've heard her fans say this before, but I didn't know I would feel it-- I immediately felt like we were friends. So much so that after we were finished and had already hugged and kissed goodbye, I blew her a kiss on the way out.

It was instinctual, and I immediately scolded myself-- “What are you doing? She's a world-famous singer who you met a few hours ago and you're on a kiss-blowing basis?” But wait, my social snafus got worse.

The next day, I was interviewing her brother Michel (who was one of the coolest characters I've met in a long time) and he made a comment about liking my shoes. What did I say? “Payless! I got them seven years ago and have glued the heels on twice, but they're still great, aren't they?” We Sagittarians are known for our foot-in-the-mouth tendencies. Anthony couldn't stop laughing. He had specifically told me to buy a nice new pair of shoes before I went to Vegas, but I was too consumed with searching for my missing cat, Kira. I wondered if Michel was going to tell Shoe Aficionado Celine that I was a fashion nightmare now... but if so, he didn't let on. He just let me hang out and disrupt his work for more than an hour, answering every question I threw his way with a smile and a story, and let me leave him with a CD for Celine to autograph for my brother. (Now Paul's most prized possession.)

I also spoke with Rene's son Patrick, possibly the best interviewee of the bunch. His observations were keen and intriguing, and he seemed genuinely amazed that I wanted to interview him at all. I wound up wanting to write a whole book about him.

Before the trip, I had been in close contact with several fan groups to find out what they wanted to know about Celine (please keep on writing me). They loaded me up with questions and I knew the answers I got were just the ones they hoped to hear. I love being the bearer of good news. Along the way, I also got to speak with assistants, bodyguards, and dancers, and Rene introduced me to a seemingly endless staff of stage crew, chefs, and musicians. What struck me the most was just how truly warm and down-to-earth the whole lot of them were. Most of the crew has been together for more than a decade, and you can feel their camaraderie. I smirked as I thought about the instructions other celebrity writers have told me they received-- “Don't look Actress So-and-So in the eye.” “Don't ask her about this topic.” “You have ten minutes. A guard will escort you out after your time is up.” There were no such limits here. There was heavy security, mind you, but as long as you were inside, you were treated like family.

Every interview ended with kisses on both cheeks and offers to talk again anytime. Celine asked me to come back to Las Vegas to meet with her again, which is currently up in the air. I'd like to go back once more in the coming weeks, but I have to ensure that travel expenses will be covered for my husband or one of my parents to come with me. I'm just not ready to fly and stay on the Vegas strip alone yet. (And if you were wondering, I loaded up on Dramamine and ginger root and wore Sea-Bands and got through that flight while digging only minor gouges in my mom's arm, thankyouverymuch!)