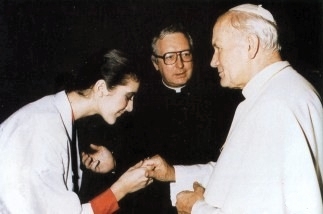 In Fall 1985, Celine Dion did a trip that marked her deeply: she and her mother, Therese, were invited to join a French Canadian delegation flying to Rome so as to hand Pope John Paul II a rose especially created for him when he came in Montreal.

On October 13, 1985, Celine was received by the Pope, at his summer palace in Castel Gandolfo. John Paul II remembered very well his trip to Canada one year ealier: "I keep in my memories a special place for Canada, one of the most beautiful stops during my trips. What a wonderful country!" he said while welcoming her. Both proud and stressed, Celine handed him her Gold Disc of La Colombe and chatted with him for more than five minutes. Leaving the audience, she revealed: "When he took my Gold Disc, I thought my heart was going to stop. He's so handsome, I'm so impressed. I'm very lucky. Seeing the Pope once in my life is a huge privilege, but twice..."