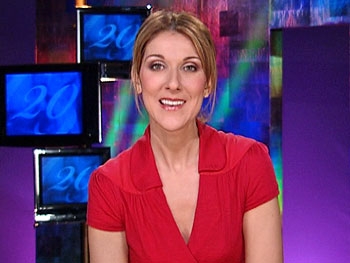 On Tuesday, October 12, 2004, in the morning, Céline Dion taped in Chicago the Oprah Winfrey Show, broadcasted on Thursday, to talk about being a mom, and her new album "Miracle".

Here are some quotes from the show:

Céline Dion loves everything about her three-and-half-year-old son, René-Charles, and knows she's spoiling him. She says she and her husband, René, regularly take René-Charles to Chuck E. Cheese and on miniature golf outings. René and René-Charles especially like to golf together. "You know what he does," René says. "He hits the ball and then he starts running. He runs after it. And he hits it again and he runs again. And every time when we finish, he tells me, 'Wasn't it a great day, Dad?'"
"My mother called him 'little prince,'" Céline said. "Actually, we have an extravagant life, but we're trying to live as normal as possible." But Céline says she isn't the only one who dotes on René-Charles! "First of all, my mother's supposed to help me. She raised 14 children. She's supposed to constantly ask me, 'When he is going to stop using a bottle? When are you going to send him to school?' She's doing the opposite. She says, 'He's a baby. When you cut the bottle, your baby's gone.'"

Now that their own miracle baby René-Charles is over three years old, are Céline and René thinking about adding to their family?
"We want to. Believe it or not, we needed help to have this one. We tried for six years before. I'm not going to tell the whole story again," says Céline. "But we have a little embryo in New York which was produced at the same time as René-Charles. To be honest with you, there's no way for me as a mom, knowing that this embryo is part of René and me and is waiting for us in this iceberg…I need to bring this baby to the sun. … I have to give it a try. I have to go there after Vegas. I have to take a long break. I have to go back. Put this baby in my belly and give this baby a chance."
Stay tuned…Céline has just signed on for another year of her show in Las Vegas…which was sold out the first 280 nights of its performance!

Céline and award-winning photographer Anne Geddes first met when a 9-year-old friend of Anne's, and huge Céline Dion fan, was dying of cancer. Anne heard Céline liked her work, so she asked Céline to write this special little girl a note. When Céline showed up at the hospital, this union began. Anne later took photos of René-Charles when he was just three weeks old. Céline and Anne then partnered to create this beautiful book featuring 80 photos of babies, some with Céline, and CD Miracle. It was labor of love for both.
Oprah: How do you get the babies to pose in the flowers?
Anne: Photographing flowers has always been one of my real loves, apart from the babies. So we photograph the flowers first and then we decide where we're going to put the babies and then cut the soft foam shapes and lay the babies in them. It's a little bit more complicated than that and in the computer we put them both together. … When [the babies are"] asleep, they're very supple. They like to be folded. It's like being back in the womb…you see it.
Céline: I'm telling you, doing this was like taking those babies so close to my skin, my neck, I could breathe them. Oh…I wanted to take all of them home!

Céline performs "A Mother's Prayer," "Beautiful Boy," and the title track of her new CD and book with Anne Geddes, "Miracle" for the audience.

Celine also taped a special segment to congratulate Oprah on her 20th anniversary season, broadcasted in November 2005.
"Happy 20th anniversary, Oprah," congratulates Celine Dion. "I just want you to know how lucky I am that I know you, as an artist, as a friend. I love you very much—I am a big fan of yours. To count you as a friend of mine is something incredible. You're such an inspiration. I love you!"
"When you went to Africa, it was something very touching knowing that a lot of those kids, they walked for two days and more than that without shoes to get to that party. It made such a difference in their lives, giving them hope and something to cuddle and something to bring back to their own soul and heart. Through your shows you've changed the perspective of the world, you've changed so many wonderful things. You give hope to people—that's tremendous, extraordinary.
"The show that I remember most was when you brought my whole family on the show. I was talking with you and you said, 'We have a surprise for you.' I turn around and my 13 brothers and sisters and both my parents appeared. (1997) You flew them in and that was an incredible moment for me and I'll never forget. I love you a lot—you stay well. Congratulations!"