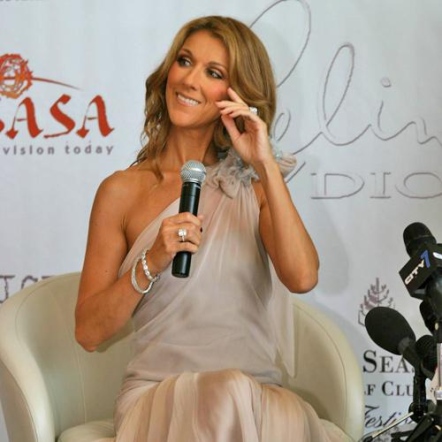 During the conference, Celine said: "We are ready to see Dubai. All of us have heard such wonderful things about the city and when we landed it was dark and quite foggy. My son tried desperately to search for the hotel in the middle of the ocean and I told him that mother nature had asked us to wait until tomorrow! We do plan to see the sights during our three-day stay and wish we could stay longer". She also said she loves cooking and she would especially love to learn more Middle Eastern cuisine for her family.

After the press conference, Celine Dion was interviewed for the Arab music channel Melody Hits, wich broadcast a TV special about Celine´s "Taking Chances Tour" station in Dubai. The broadcast, aired on April 10, 2008, included a brand new interview with Celine and fascinating insight into the tour lives of Celine and her entire crew.

In the evening, Celine Dion and her husband and manager, Rene Angelil had a dinner at the Cafe Blanc Dubai, a restaurant located at Downtown Burj Khalifa mall in Dubai, United Arab Emirates.