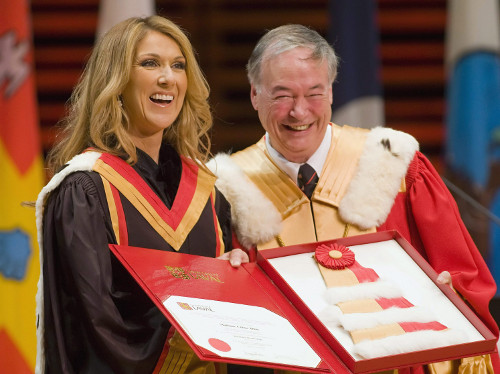 On August 21, 2008, Celine Dion received a honorary doctorate in Music by the Laval University, the oldest centre of education in Canada and the first institution in North America to offer higher education in French. The solemn ceremony took place at the Palais Montcalm in Quebec City, Quebec, Canada.

The mayor of Quebec, Régis Labeaume also gave her an honorary medal for cultural merits for the city of Quebec to Celine in tribute to her commitment for her homeland.

After the ceremony, Celine and her husband, Rene Angelil gave a press conference, where she said she didn't get to go to school for as long as she would have liked to but that actually living in the real world is a great teacher but at the same time she is pleased her son Rene Charles is enjoying school. She also talked about how she faced big pressures in life and how she has coped with those and she talked about her pride in being involved in the upcoming 400th anniversary concert in Quebec. The entire event was broadcasted live on TVA and LCN channels in Canada.