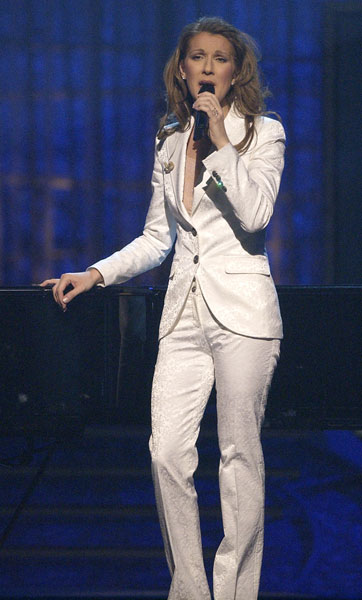 On Sunday, February 8th, 2004, Celine Dion performed "Dance with my father" at the 46th Annual Grammy Awards in a special tribute to Luther Vandross along with Richard Marx at the piano. The ceremony was held at 8:00 p.m. ET, from the Staples Center in Los Angeles, and was broadcast on CBS.

At 9:00 p.m., after being introduced by Patti Labelle, Celine Dion came onstage, where Richard Marx was waiting for her, at the piano. But, as she started the song, Celine Dion's microphone simply wasn't working, and someone backstage could be heard saying, "Should I take it up? Should I take it up?". Finally, someone in the CBS broadcast booth said yes, and an unidentified man appeared onstage and handed Celine Dion a new microphone. She complained that she still couldn't hear herself but she restarted the song. Then there was some great audio feedback. Eventually, she removed her earphones and proceeded.