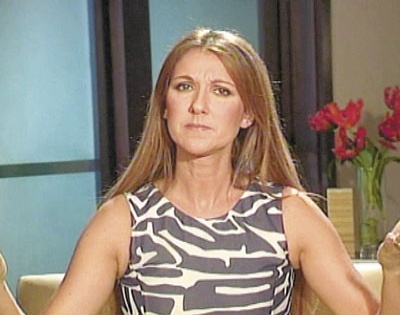 On Saturday, September 3rd, 2005, on CNN's Larry King-hosted special, "How You Can Help," Celine Dion was furious and emotional, as she talked about the disaster of Hurricane Katrina.

Larry King: Joining us now is an old and dear friend, Celine Dion, the musical superstar. She's in her dressing room at Caesar's Palace in Las Vegas. She will go on stage in about a half hour. She and the director of her wonderful show, a show I've seen, Franco Dragone, have donated by the way, pledged $1 million to the American Red Cross. What has been your response, Celine, to this? I especially ask this because you're French Canadian from Montreal and New Orleans is a mostly French city.

Celine Dion: Correct and I've been there a few times. We've stayed there. I've, you know, filmed videos there and so Rene and I, we've been to New Orleans. And, I have to say, Larry, that and state it as the rest of the world if I may I was watching you behind, there's a television right now, I'm watching and I'm especially waiting like the rest of the world. I'm waking up in the morning. I'm having a coffee. I barely can swallow it. I come here at Caesar's Palace every night to perform. I barely can sing. But for respect the people who come I am still singing. When I come home at night, my son is waiting for me. I watch television. Yes, we gave $1 million but what we expect, what I want to look like the rest of the world, I open the television there's people still there waiting to be rescued and for me it's not acceptable. I know there's reasons for it. I'm sorry to say I'm being rude but I don't want to hear those reasons. You know, some people are stealing and they're making a big deal out of it. Oh, they're stealing 20 pair of jeans or they're stealing television sets. Who cares? They're not going to go too far with it. Maybe those people are so poor, some of the people who do that they're so poor they've never touched anything in their lives. Let them touch those things for once. The main thing right now it's not the people who are stealing. It's the people who are left there and they're watching helicopters flying over their heads and they're praying. How come it's so easy to send planes in another country to kill everyone in a second, to destroy lives? We need to serve our country and for me to serve our country is to be there right now to rescue the rest of the people. We need the cash. We need the blood. We need the support. Right now we need the prayers. You know when I was hearing a couple of days ago that these things are not reachable it's too full of water, maybe I'm too much like my -- I'm not thinking with my head. I'm talking with my heart. Nobody can open any roofs? The helicopters flying in take two people at a time, take a kayak. Go into those walls. There's kids being raped at night. They hear gunshots, big guns, what's that? Those people are praying. They're walking. They're like this, hello, do you see us? We're still alive but we're dying. It's terrible.

Celine Dion: I do not want to talk to you about money.

Larry King: How do you explain it to your young son?

Celine Dion: Well, I have to (INAUDIBLE).

Larry King: Are you OK?

Celine Dion: Yes, Rene Charles knows because sometimes he watches televisions with me and I'm saying to him those people went through a big storm and they will be fine because I know at the end they'll be fine and I hope and we're all praying for them. I'm trying not to put to Rene Charles something so dramatic and that's why I'm sorry for crying so hard because I'm holding it for the last week and I'm trying to tell my son that everything is going to be OK. But I see those mothers over there, they're like (INAUDIBLE).

Celine Dion: I understand it. I understand it's very important because eventually they will need that money but it's just very frustrating that Franco and (INAUDIBLE) and me oh $1 million. This is one thing. In three months, in six months they will need that money. Right now they're praying for water so we need to send them the water. They don't care about my check. So, it's just frustrating because in our part of the world we're trying our best and we're expecting those people -- I'm sorry.

Larry King: Your check will turn into something. I know you got to go on soon but we couldn't spend any time with you without asking you, do you have any kind of thing you would like to sing that fits this moment? Is there any song?

Celine Dion: Well, the only song that comes to my mind right now is definitely a prayer. I did sing that song a few weeks -- a few years back with Andrea Bocelli.

Celine Dion: God bless them all.