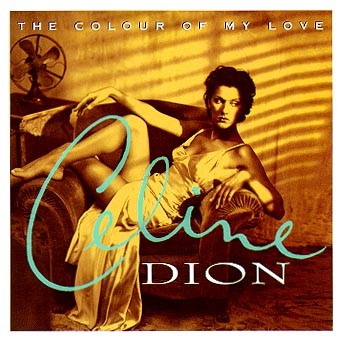 With the release of her album The Colour Of My Love on November 8, 1993, Celine revealed during the press conference who was the man of her life, a secret that Rene and she have kept hidden for a long time. Besides, at the end of the usual thanks, she wrote on the booklet:

« René, for so many years I've kept our special dream locked away inside my heart... But now it's getting too powerfull to keep this inside of me... So after all these years, let me "paint the truth, show how I feel, try to make you completely real »... René, you are the colour of my love. L.V. » - Céline

In 1995, British fans took extremely well to Think Twice, a ballad on The Colour Of My Love. For five consecutive weeks, the song and the album stood on top of the respective British charts, an achievement not replicated since 1965 and the heyday of The Beatles. Think Twice remained at number one for two more weeks, surpassing the magic million mark to become only the fourth million-selling single ever in the UK by a female artist.

Everybody's talking my baby down

When I fall in love

(Duet with Clive Griffin) (Theme song in "Sleepless Nights In Seattle") Note that Warren Wiebe first made the demo of Clive Griffin's part in the duet. The song was produced by David Foster. Nat King Cole originally recorded it in 1952.

(Barry Mann, Cynthia Weil, Phil Galdston) Love doesn't ask why It speaks from the heart And never explains Don't you know that Love doesn't think twice It can come all at once Or whisper from a distance Don't ask me if this feeling's right or wrong It doesn't have to make much sense It just […]

(Tony Colton, Richard Wold) I remember L.A. Seems a lifetime ago We were stars on Sunset Boulevard What a movie we made There were days in the sun That have stayed forever young Nights when passion was invincible We thought love would never die (Chorus) There were moments in that lifetime That my heart still […]

No living without loving you

(Diane Warren) If you ever leave me Life will go on Stars will still be Bright as diamonds in the sky now Even if you said goodbye now Oh, the clock wouldn't stop, no That sun would keep shinning down If you weren't here with me This world would still be spinnin' 'round But baby […]

The colour of my love

"A few years ago, when I was touring in Japan, Celine tells, I met an incredible young violonist: his name is Taro Hakase, and we have recorded this next song together." To love you more was the theme song for a popular Japanese drama series.
×